We as a company bear great responsibility for our immediate environment. We are aware of this responsibility and therefore make targeted investment in nature conservation initiatives. Through our actions, we also aim to raise our employees’ awareness for this issue and encourage their own initiative.

Bees are an integral part of the natural eco-system. They are very much the focus of public attention and depend on protection and support more than ever. DURABLE has therefore decided to use the large grounds of its Gotha facility to accommodate its own bees there and give them a safe home. In this way, DURABLE wants to make an active contribution to protecting the bees. To provide optimal living conditions for the new residents, the surrounding area was planted with a meadow of wild flowers to make it especially bee-friendly. The project was launched in 2020, our centenary year. The first honey was harvested in 2021 and sold to employees at all our sites. The revenue was then channelled back into a nature project that protects habitats for bees. But introducing bees to the Gotha site is just the first step. The aim is to continue naturising the site to attract as many insects and species of birds as possible. We’re also exploring options for replicating the idea at other DURABLE sites.

Who takes care of the bees?

The experienced beekeeper Antje Funke accepted the job of looking after and nurturing the bees professionally. The expert regularly visits the approximately 120,000 bees, feeding and maintaining the sensitive colonies. Funke is a local and also advises DURABLE on developing the design of the apiary’s immediate vicinity. She makes honey from the nectar the bees collect nearby. Each season, the tireless work of each hive produces around 50 kg. 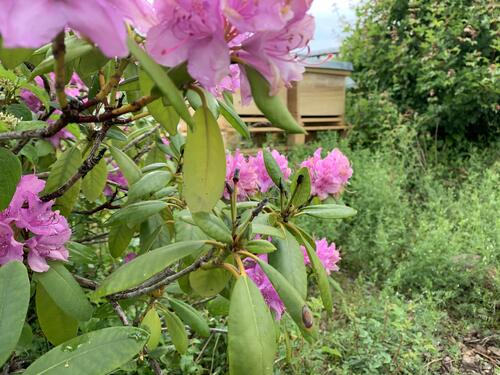 DURABLE has a tradition of commitment to social and environmental projects. This time, the focus here is on protecting endangered animals, not helping people in need. ‘To us, it is important to help maintain a healthy ecosystem. That is why we decided to give our bees a home that is as natural and safe as possible,’ explained spokesperson Martina Heiland. ‘This is only the very beginning of our nature conservation efforts. We plan to develop the area into a biotope in the next few years.’ 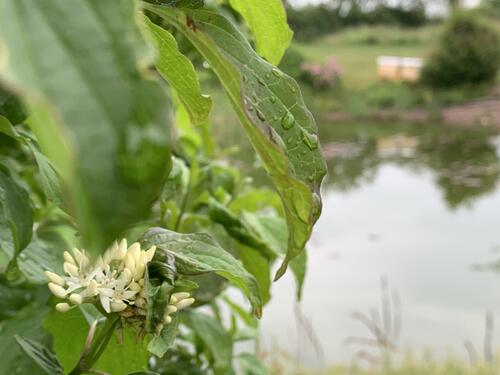 What do bees do in winter?

Bees spend the winter in a winter cluster

As soon as they sense the cold winter months coming and the sources of summer nectar are no longer available, bees must switch to an entirely new survival strategy. Instead of leaving their hive at regular intervals to return with nectar, they find themselves faced with the task of keeping each other warm. When it’s cold outside, bees huddle together to stay warm. They form a ‘winter cluster’.

As they do in summer, the bees function as a team. As soon as the outer bees get too cold, they switch places with the bees who have warmed up at the core of the cluster. Only the queen bee stays at the centre of the cluster the entire time, where she is kept warm at all times. Bees remain inside their hive for months during the winter.

Cuddling and shivering to survive 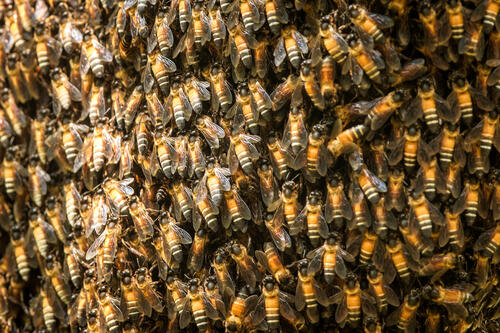 What happens when the temperature rises again?

Winter bees live for up to nine months. Queen bees do not lay any eggs in winter. In early February, when the temperature starts rising, queens start to lay eggs again. Once spring arrives, the worker bees hatch and are ready to leave the hive and begin gathering nectar. 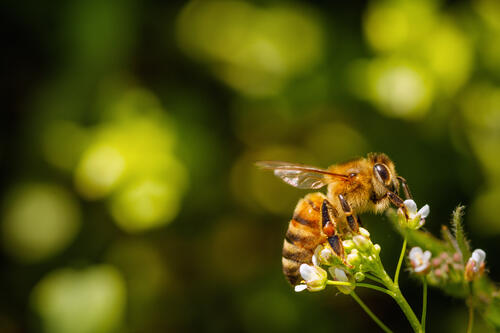 The bees are taking off again

Once the first flowers started to bloom and the temperatures began to rise, the first bees left the hive again in March. Hundreds of bees swarm out of the beehive at once. They have survived the cold of winter and now have a very specific goal. A bee colony’s first flight is all about emptying their digestive tracts. As the beehive has to be kept clean throughout winter to prevent the spread of germs, they don’t clear their systems until their cleansing flight in spring.

After a colony’s first flight, the worker bees set off again to find pollen for the young brood. We’re already looking forward to keeping track of the DURA BEEs’ work until we can hold the first jar of honey in our hands. 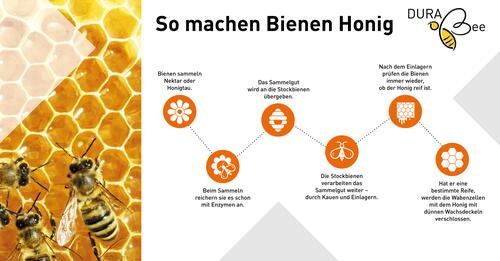 1. How long do honeybees live?

During the summer months, a colony’s worker bees are busy around the clock. They look for sources of food to feed the larvae, collect nectar, build honeycombs, and much more! Due to their demanding jobs, honeybees only live for 35 days on average. Queen bees, on the other hand, live for almost five years on average.

2. What do bees eat in the winter?

The honey that bees produce is stockpiled as provisions for the winter. When we humans help ourselves to honey in autumn, we are depriving the bees of their winter rations. To make up for this, beekeepers feed bees sugar water that they ferment and store for nourishment in the winter.

3. What do you do when a swarm of bees leaves the hive?

The German Civil Code doesn’t just govern human conduct, it also lays out what you have to do if your own bees leave the hive. If they do leave, and you don’t follow the swarming bees immediately, you forfeit ownership of the bees. If you do follow the swarm, you are permitted to enter third party property and, in emergencies, you can even open someone else’s uninhabited hive.

4. How many species of honeybee are there?

Honeybees have populated the Earth for 40 million years. There are nine different honeybee species around the world. The species Apis mellifera is native to Europe and Africa. In Germany, there are three sub-species of Apis mellifera: the European dark bee, the Carniolan honeybee, and the Buckfast bee. It is difficult for anyone who is not an expert to distinguish them.

5. Bees are not black and yellow

Only female bees have the ability to sting, as male bees do not possess a stinger. Unlike wasps, which can sting multiple times in a row, bees sting only when they believe their colony is under threat. Once they have used their stinger, bees tear off part of their abdomen in an attempt to remove the stinger and then die.

7. How many eyes do bees have?

Unlike humans, bees have more than just two eyes. The two large faceted eyes (compound eyes) that observers notice first are unable to distinguish between light and dark. To be able to do that, bees have an extra type of eye. Called ‘ocelli’ eyes, these three eyes cannot move and are located in the middle of a bee’s head.

8. The queen bee determines the gender of the other bees

The queen decides whether a worker bee (female) or a drone (male) hatches. Females are produced if the egg is fertilised, whereas males develop from unfertilised eggs (parthenogenesis). The queen selects the eggs to be fertilised.

A honeybee’s maximum speed is just under 24 km/h.

When bees fly over large meadows full of flowers with different colours, they tend to make a beeline for the blue and yellow ones. Bees are able to see ultraviolet light, which is why they cannot see red.

11. How much work does it take to produce a kilo of honey?

350-400 bees have to work their entire lives to produce a kilo of honey. A single bee produces around three grams of honey during its lifetime.

12. How much beeswax does a bee colony produce?

In contrast to the abundance of honey that a bee colony produces in one year, it makes only enough wax for about six tea lights. The wax is made in special glands in the worker bee’s abdominal section.

13. Bees can track down drugs and explosives

With systematic training, bees can be conditioned to react to certain scents. They can be used effectively to search for drugs and explosives. This method is already used in the United States. In fact, bees are even better at it than the average tracking dog.

14. Queen bees only have one mating flight

A queen bee only leaves the hive once in her life to mate. She mates with several drones. The mating flight yields a lifetime supply of sperm to fertilise her eggs.